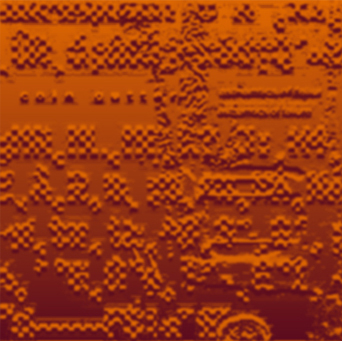 Asthma can feel like that, when we stand on your chest.

Asthmatics Of Failure was created in late 2009 and early 2010 with the two members of Coin Gutter spanning a distance of approximately 3400 km, Graeme Scott in Ontario, and Emma Hendrix in British Columbia.

One of the things about the aesthetics of failure is the difficulty in discerning choice from chance. Take the titles of the two tracks that constitute Asthmatics of Failure, the new lengthy EP by Coin Gutter. The first track (at almost 25 minutes) shares its title with that of the full recording, while the second (at more than half that) has the sort of typographic error that happens even in this age of automated spell-check: “Asthamtics fO Faliure”. Either of the two little mistakes inherent in that title would be easily taken as a mistake; together, it’s either downright sloppiness, or a concerted effort.

The idea of failure as a concerted effort is not new to music, even if the sounds of glitch seem unique to our era. Jazz improvisation, of course, is built on the idea that if you mess up, work the error into your music. Classical composer Morton Feldman loved the purposeful asymmetries built into traditional rug-weaving patterns, and employed that in his stasis-defying compositions.

As for Coin Gutter’s two tracks, failure may serve as an overarching term for the noises from which the music is constructed. This is purposeful music built from detritus; it’s music in which momentum is inherent, even if the momentum is founded on discarded materials, the stuff of cultural entropy. The title track rises like a distant church organ solo into a roiling slow boil of rhythmic texture, and if the second track (in which scraps of voices struggle to make themselves heard) has a more pronounced rhythm, it’s only as a matter of comparison between the two.

Coin Cutter is two Canadians: Graeme Scott of Ontario and Emma Hendrix of British Columbia. It’s rare that netlabel releases carry the name of the person who mastered them, perhaps because it’s rare for a netlabel release to be mastered; in this case it was one Paul Keeley.